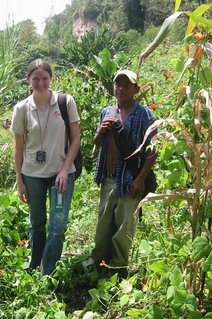 I walk up with a group of men with machetes, a few kids 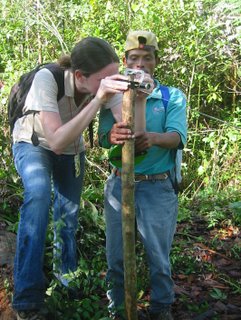 , and a few dogs to observe the water 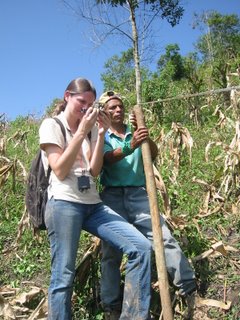 source at the top of the mountain. I struggled to keep walking. The first hour we walked from one town where they were going to get the new water system, to the neighboring town, about 6 km away on an impassable dirt road. There the community members were arranged and an agreement was reached between the two communities to allow the use of the water source for a fee of about $1000. Before the contract could be signed, we had to view the water source, a task much easier said than done. I was still tired and covered in mud from the hour walk out to the village, but if everyone else wanted to do it, the engineer couldn´t refuse giving her professional opinion of the water source. So we started on the 2.5 hour hike up and down and up the mountain. I don´t know how I made it to the top. One of the villagers offered to carry my backpack, and another cut me a hiking stick which I definitely needed as a third foot to make it up and down the muddy slopes. Somehow I mustered up enough strength to make it to the top. I was able to have a little rest when we made it to the top. There was plenty of water at the source and it was well-protected. We took a measure of the flow rate, and then it was time to 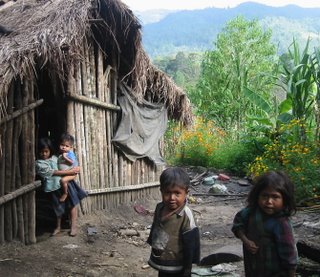 descend the mountain and return to the village. It was going to be a struggle to make it down the muddy mountain, and I was already past tired, but I didn´t have 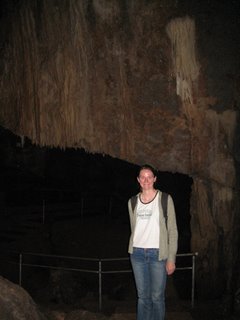 any choice but to continue. But then it started to rain. It quickly became pretty much impossible to walk, and after sliding down for a while, someone cut me another stick to try to give me some more balance. I was now skiing down the mountain. The community members were accustomed to walking in such conditions, and only I and the mayor´s representative seemed to be struggling. Somehow I made it back to the village; I was soaked and covered in mud, but fortunately without any serious injury (my camera did not fare as well). They wrote up and signed the agreement and we walked the hour back to town, where my ride was waiting for me to drive the hour back to La Esperanza. I got home just after dark and ate a big supper. Then all that remained was to do the 18 km study of the water line, beginning the next day. Somehow I managed to back it back out there the next day and begin and we finished with the study 2 weeks later. The following week we finished the report, and are now waited for funds from the government through the Strategy to Reduce Poverty. I don´t think I have ever been so sore or tired in my life, but if the project gets built and the 130 houses get water, it will be worth it. And when else can you go hiking on paths where no one else travels, where the path is cut right before you measure by your small army of men with machetes.
Posted by Maryanne at 12:57 PM

Now the story of "walking on water" or the new version of "walking for water" takes on a new meaning.