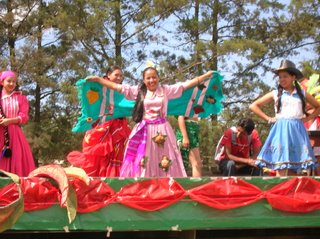 The other week, we had the biggest cultural event of the year in La Esperanza, the Potato Festival. There was plenty of street parties with music and dancing, and even a potato parade and a potato queen. I still don´t know where all the people came from for the festivities. But it was a nice change of pace from the normally quiet atmosphere.

It no longer feels so much like I´m living in a foreign country, it feels more like normal life. But even so, there are still plenty of new experiences, and I feel privileged to be able to really live here. I went out to San Miguelito last week to do a water study. Just getting to the water source was quite an ordeal. When we finally got a ride out in the back of a police pickup, we drove about an hour on a narrow, rocky, 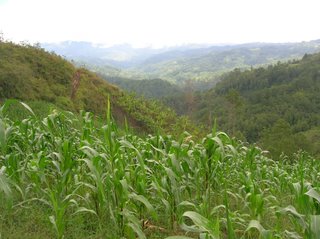 dirt road. From there we had to hike 3 kilometers up to the water source to begin our measurements. We had a group of men with machetes going out in front of us to cut the line so we could measure it. It was quite a way to go hiking on an untravelled path with an amazing view and a group of ´tour guides´. While of course I slipped a good number of times at the muddy parts and got some wet feet, fortuneately I didn´t fall off the side of the mountain.

I am struck by the level of poverty I find when I leave La Esperanza and go out into one of the small surrounding communities. If you go into someone´s house there, even someone who is relatively well off, you find that all the people usually sleep in one room. If they are lucky, maybe they have a co 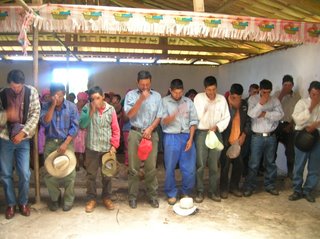 ncrete floor and a bench or a couple plastic chairs, but that is about it. There are usually no decorations on the wall except maybe one random photograph that someone has given them or a diploma from some workshop. You see the children running around, 8 or more in one family, often only half dressed and with their stomachs sticking out from worms. You are forced to realize what you take for granted when you see people who really have nothing. It is easy to become overwhelmed by the poverty and think that it is too great to do anything, but then again if you can do anything small it can make a huge difference.
Posted by Maryanne at 10:05 AM

I'm sure you are making an impact, cuz. Thanks for the writeup -- fascinating to hear about life in La Esperanza...