Life in Honduras is quite different from life in the US. Things do not happen at the same pace and are much more dependent on the surroundings such as weather. I have to wait to shower until there is enough water pressure. 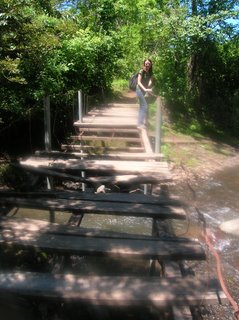 Catching a ride in the back of a pickup truck is not the best idea when it is pouring rain. I think a lot more about what I throw away when later I have to burn it in the backyard. The walk into town also seems too long in the rain. A 4 hour bus ride seems short and potentially luxurious is the road is paved and you have a seat. Time is relative. Now half of the country is on daylight savings time and half the country is on the old time, with no real certainty as to who uses which time. Some buses follow the old hour and some follow the new hour, but in either case nothing happens on time. The other day I was eating ice cream (yes, we have one small ice cream parlor in La Esperanza, but it was unfortunately raisins and not chocolate chips in my ice cream) and I realized that I no longer felt self-conscious when people stare at me, because it is such a common thing here. The saying that it´s not polite to stare does not apply to Honduras, and a gringa is something that everyone stares at. The other day I went out to do a topographical study. I had arranged to be at the community at 8 (and had specified the new time), but had to wait around at the office until 10 for a ride. I finally got out there, after being delayed 5 times along the journey by cows in the middle of the road, around 10:30 where the members of the water board had been waiting an hour and a half. I went out with the community members to see the water sources and existing tank (a nice hour hike where I learned about quick mud, twice, and that waterproof boots are not useful when the mud comes in from above).
Here in La Esperanza, I´m pretty lucky to have access to many modern conveniences. We usually have electricity and water and even have a telephone in the house. We don´t have a television (which makes us rare here) or a washing machine (so I am getting good at pila washings, but now that the rains are starting it´s hard to get your clothes to dry). There are numerous internet cafes with decent connections when the skies are clear. We have a wonderful vegetable and fruit market where Lencan people with colorful head scarves come from all the surrounding villages to sell their produce (from strawberries to broccoli and now even wild mushrooms) at pretty cheap prices without bargaining. The market used to be a few blocks away, before it was burned down on Christmas last year (the day when no people were there) for some political reason I don´t understand. Now the vendors have taken over the street in front of my office, which has created an interesting traffic situation.
Sometimes it feels that the cultu 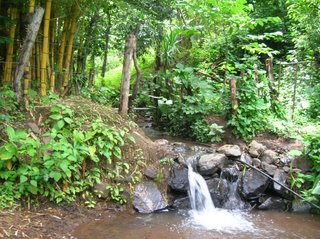 ral and language barriers make it too difficult to accomplish anything, but then at the same time I am doing things here in Spanish that I probably wouldn´t have been willing to do in English. Gringos here stand out no matter what, and for better or worse are automatically seen as being some sort of great authority. Still I wonder if I will really ever fit in here or fully be able to communicate in Spanish. But the people are welcoming and it is heartening to walk toward my house with the neighborhood kids calling out my name and running up to give me a hug. And the work here is exciting and useful. I am able to go work in communities where there is a real basic need and actually help them to fulfill that need.
Posted by Maryanne at 10:26 AM